The fez was named for the city of Fez, the metropolis of Morocco, which was the seat of numerous schools, libraries and a famous university. Fez formerly had a monopoly on the manufacture of that peculiar form of headdress because it controlled the juice of the berry used to color the fezzes. Since the discovery of synthetic aniline colors, however, they were manufactured in France, Germany and Austria. At the turn of the century Austria was the chief center of the fez industry. The countries where the fezzes were extensively used did not have a single fez manufacturing plant

The shape of the cap is a truncated cone familiar to all the Nobles of the Mystic Shrine. It was made of red felt, having a black tassel inserted in the middle of the top and hanging down. Although the shape and the tassel of the fez known to the nobles are such as are generally used throughout turkey, yet in Tunisia, Tripoli and Morocco, the fezzes are twice or three times as long as the popular type, and have blue silk tassels much longer and heavier than those seen in America and Turkey.

In the early part of the nineteenth century the fez was made a part of the Turkish official dress by Mahmoul II, Sultan of Turkey. It was considered the special badge of a Turkish subject and he, even if not a Moslem, was obliged to wear it. Women as well as men wore fezzes but theirs were invariably small and without tassels.

Soon after the inauguration of the new Turkish regime by the young turks, a national misunderstanding arose between the Turkish and Austrian peoples, and the former vowed they would boycott all Austrian goods including the fez. Destroying the fezzes which they had and refusing to buy new ones. The people throughout turkey, for some months, covered their heads with Persian caps or with any headgear which they could improvise.

The fez was worn either with or without a turban by Moslems, Christians and Jews. The Turkish soldiers and officialdom in Turkey, including the Sultan, with the exception of certain ecclesiastical dignitaries, wore their fezzes without the turban. Among the moslems, those who can trace their genealogy back to Mohammed wore green turbans, all others wore white or some color agreeable to local custom, personal taste or fancy.

The conventional uniform for Nobles of the Mystic Shrine was full evening dress with a red fez, usually bearing the name of the Centre, in addition to the crescent and the sphinx head embroidered in gold.

About 980 a.d. when the pilgrimages to Mecca were interrupted by the crusades, Mohammedans and those of the Moslem faith living west of the Nile, journeyed to Fez as to the Holy City. A manufacturer in Fez supplied to the students, of a great school, a scarlet tarboosh, which was the insignia of the school. This was the means by which students were readily recognized. The fez, as the tarboosh was called, was carried by pilgrims who wore similar pieces of headgear. The fez soon came to be worn all along the northern shores of Africa, and its use gradually extended east of the Nile.

WHERE DID THE SHRINERS’ NEAR-EAST THEME COME FROM?

The Shrine is as North American as baseball, hot dogs and apple pie. It was tied to an Arabic theme by its founders, Billy Florence, an actor, and Walter Fleming, a physician. Fleming and Florence realized the fledgling fraternity needed a colourful, exciting backdrop. It is believed that Florence conceived the Shrine’s Near-east setting while on tour in Eastern Europe.

As the legend goes, Florence attended a party in Marseilles, France, hosted by an Arabian diplomat. At the end of the party, the guests became members of a secret society. Florence realized this might be the ideal vehicle for the new fraternity, and he made copious notes and drawings of the ceremony.

When Florence returned to the States, Fleming agreed, and together they created elaborate rituals, designed the emblem and costumes, and formulated the salutation.

Though the Shrine is not itself a secret society, it still retains much of the mysticism and secrecy of its origins. 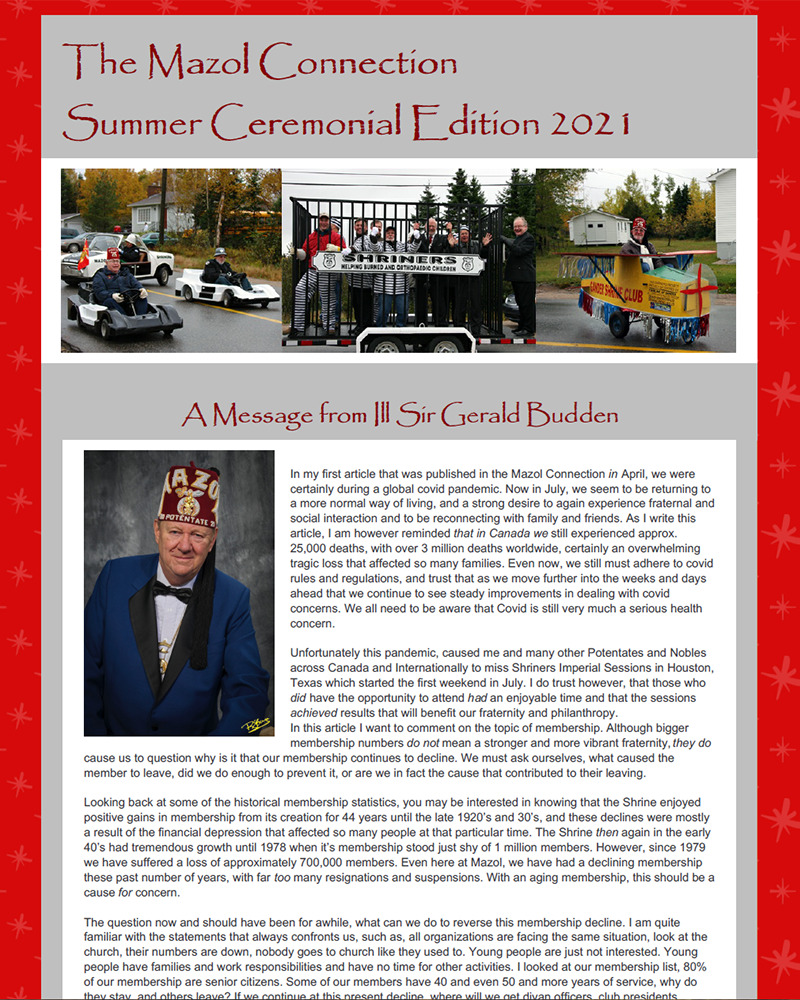