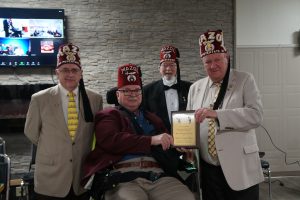 It is with great pleasure that Mazol Shriners of Newfoundland and Labrador announces that the Shriner of the Year for 2021, is Noble Donald Wayne Moores of the Compass Shrine Club.

In 2021, Noble Wayne participated in the Ceremonial Divan for the Summer Ceremonial for which he had to arrange special transportation to get to and from the Shrine Centre. Noble Wayne has a medical condition that has left him confined to a wheelchair, but this has not deterred him as he attended every meeting the Compass Shrine Club held regardless of his condition. Several times he drove his wheelchair to the Glacier and back rather than miss a meeting – this shows absolute dedication to the Shrine and our Philanthropy.

In 2021, Noble Wayne served as chairman of the nominating committee for his club and filled a full slate of officers for 2022. He is a very valuable and respected member of his Shrine Club and has assisted in helping the Club get back to normal operations. Also, in 2021, he was again the key organizer of an extraordinarily successful Christmas at the Glacier. He did many shifts selling tickets and, when not selling was ensuring the schedule that he had developed was working correctly.

Noble Wayne is a very active mason and has been or currently is a member of the following:

He is a tireless worker for his Lodges, Shrine, Church, and family.