Let me introduce you to 14 year old Malcolm Hollett of St. John’s, Newfoundland and Labrador, Canada, son of Elizabeth and Phillip. To look at him today, you would know that he has been through something, because he walks with crutches, but he does so with great determination and a smile as wide as the great outdoors. To appreciate how far Malcolm has come on his journey we have to go back to February 16 of 2015 and a family ski trip a couple of hours drive from the city to Clarenville. While on this trip Malcolm suffered a spinal cord injury. On that day the whole family was left in complete shock. Within just 7 hours of his injury he was transported to the Janeway Children’s Hospital in St. John’s where Doctors discovered he had suffered a T12-L1 fracture dislocation and performed surgery. 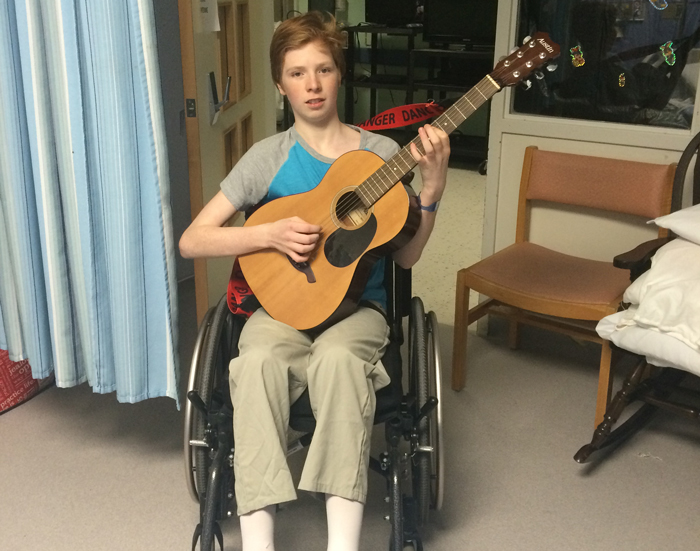 Elizabeth and Phillip learned that their son’s condition was a rare injury, and, as a result, there was very little experience locally with treating this type of injury. Phillip was told that the only thing they could do locally would be to prepare Malcolm for a lifetime in a wheelchair. Through Phillip’s brother, Dr. Peter Hollett, and their family pediatrician, they began a search of hospitals to give their son the best chance of a recovery. Of the 5 potential hospitals, the Shriners was at the top of the list. Phillip contacted a Masonic friend, who was also a Shriner, who said he would make a phone call and that Phillip and his family should be prepared for things to happen fairly quickly. Nine days later Malcolm and his family were in Philadelphia at the Shriners Hospital that specializes in treating children with spinal cord injuries.

Malcolm was welcomed with open arms and the medical team began their assessment. Malcolm had some feelings of sensation in his legs but no mobility. Within a week something marvellous happened. Malcolm gained a very faint ability to contract his thigh muscle in his left leg. His parents were overjoyed. A sparkle of hope, a small dim light had appeared. When Malcolm’s physician, Dr. Lipa, learned of this, she too shared their excitement and a whole new path of rehabilitation was opened up.

From then on Malcolm was doing 4 hours of therapy a day. This process also continued on the weekends. In time, that initial sparkle of light grew stronger and stronger because of the determined effort by Malcolm and the therapists to retrain Malcolm’s brain and muscles through continuous therapy.

Over the next six months, the Shriners hospital provided Malcolm with several highly specialized therapy techniques while his was still completely wheelchair dependent. Soon after Malcolm arrived in Philadelphia, custom designed short and tall braces were made for Malcolm. On April 2, Malcolm received his tall braces and was able to stand and walk for the first time since his accident. That first day he walked 200 feet. Later that day, a therapist’s aid told Phil and Elizabeth “this is practically unheard of”. One of the many therapies used to activate his leg muscles was a Functional Electrical Stimulation (FES) bike. This helped reduce and prevent muscle atrophy as well as encourage recovery of muscle ability by applying electricity directly to the muscles. As the therapy progressed he got to use a very specialized piece of equipment called a therastride, which allowed him to relearn to walk using a specially designed treadmill, while his weight was partially supported by a body harness. Four therapists worked with him on the therastride to physically move his legs and stabilize his hips for him until he could do some of this for himself.

Malcolm’s condition continued to improve over the summer months, and in August, he flew home with his family, where he was greeted at the airport by his many Shriner friends.

Phillip Hollett gave an address at the concluding dinner of the annual meeting of the St. John’s Shrine Club in October, where he thanked the Shriners for everything they had done for his son. In his story he also told about the many children he had met, of whom many were from outside of North America. When the Shriners say they will respond to any child in need they really mean it! Phillip has recently become a Shriner himself and wishes to support and carry on the good work that Shriner’s do.

Malcolm is now back at school and determined to someday walk without the use of crutches. He loves sports, likes to read and write and plays the saxophone, guitar, drums, piano and writes music. More recently, while wearing his short braces, Malcolm has taken 7 steps hands free, and has started walking using canes. While outside Malcolm still uses his short braces and crutches, but inside the house he is able to walk with no braces and using canes.

In Philadelphia he warmed their hearts and they warmed his. He is very grateful to the Shriners and everything they have made possible for him.

Freemasons talk about seeking light through knowledge and advancing it every day, and with it the great hope of the brotherhood of man worldwide. In the many Shiner’s Hospitals to be found in North America, the medical staff know how to nurture and grow the light of hope in the children they serve, through the knowledge and expertise they have gained from the many thousands of children they have helped. The Shriner’s Hospitals and their staff are helping make the world a better place by looking after the needs of the greatest hope for our world, the children.

Find out how to donate to the Shriners Patient Fund